- April 11, 2019
No gyan, no information in this post, just sharing a story with you all. I am sure many of you would have encountered a bird's egg in your balcony/ varandha/ terrace- so did I!! And oh God how much analysis went into it... So sharing our cute little story of the pigeon 'Pega' who happy raised her children in our match box sized balcony :)

I am busy accomplishing my role as a temporary single mother as my husband was travelling for a month for work- plenty of things on my plate! I grabbed my cup of tea after sending kids off to school and was sipping it in my balcony- suddenly i spotted  pigeon happily sitting on my grow bag not scared at all by my presence. I took a closer look and there was an egg!! I am not ready for this and I was furious- why my balcony!! I immediately called my husband- he was so damn against it :P


My next stop- google baba.. well nothing much in flavor.. I reached out to a couple of parenting FB groups, and also my Snugbub community. 99% of them have had horrible experiences with the pigeon breeding in their premises. I responses ranging from- they spread asthama, they shit and make the whole place filthy, they don't leave the spot ever and make turn it into their maternity ward, its unlucky to have them in your house and so on. Well I felt sorry for all those who had to go through this. Taking the advice from a few, i carefully placed the egg (without touching) on a newspaper, with some mud around it and some wheat. Kept this whole thing carefully outside my bathroom window.

All this now i realise was mainly to make me feel less guilty :P Net day morning, I peeped out to check the status- expecting 11. either Pega to be there or the whole ensemble disappeared.. But to my surprise, the egg alone had survived the cold night! There was no trace of the newspaper, mud or the wheat grains. And that was it, guilt gripped me.. I reversed the whole thing and got back the egg (without touching) to another pot which was on the railing (wanting the business to not happen in the middle of my balcony), again added some wheat.. But nope, Pega was associating the egg with the place- the grow bag where she had laid it, and was frantically looking for it.

I analysed- what are the major issues in having the eggs- restricted area assess for us, and bird poop being the major issue. I thought of an idea. I got the grow bag to one corner of my balcony, put newspapers around the bag and created a small little maternity ward for Pega. Kept the egg there- and wohoo she recognised it!! and happily started hatching.. I covered the space with an old curtain- which will enable kids to observe the birds and at the same time restrict them from going too close. I explained my strategy, very proudly to my husband, he did say okay for this arrangement but was not happy with it though.

Wow, a big burden was off my head, I excitedly went down to get my kids from school to tell them the whole thing, to show them the egg and Pega. We came and saw- 'Pega had laid another egg!!' Awww I thought isn't it a miracle- an egg surviving a cold night and another popping up totally unexpected- and we decided to name the babies- Miracle and Magic! (Though till they hatched I had doubt if Miracle would hatch).

2 weeks Pega and her partner Pego, took turns in diligently hatching the eggs-man it takes a lot of patience just sitting at one place! A significant point to note here is- neither Pego nor Pega ever littered the place in this time period. My husband returned on 7th May and exactly the same day the eggs hatched- and two super tiny creatures came out- yes Magic and Miracle! Very fragile, and not at all relatable to a pigeon in terms of their look and form.

Now is when the littering began, but it was mainly in the grow bag itself. As days passed by Magic and Miracle slowly started greying and started moving around a bit.. It was a ritual for kids to meet them in the morning, keep conversing with them during the day, show them to their friends, involve them in their stories and so on.. Now even my husband had a connect with them! Pega in the meantime, was now not so frequent visitor and was seen once in a while to feed them and unlike earlier she was now so shy and used to fly away on noticing us!

Exactly a month later on 8 April Magic and Miracle took their first flight and went out in the open! Without being too sentimental, I got the place cleared and mopped- and there it was clean and clear! As a future plan, considering my husband being allergic to dust and having kids around, we had two options- either to put a pigeon net or a grill. Luckily I found an interesting product on Amazon- Bird Spikes- very reasonably priced and easy to use. This makes it difficult (well impossible) to land them on the railing. Since they have left, we have not spotted any pigeon in our balcony so far.

If you wish to have them-
1.Its a 1.5 month affair roughly but a nice experience for you to observe closely. Different behavioural aspects you get to learn is awesome!
2. Find a spot thats easy to maintain- place some sheets/ newspapers to make the space easy to clean later
3. Try to create a vertical wall/ barrier to create a room sort of structure
4. In the last week or so, the litter will start smelling. Keep agarbattis handy and use them frequently, placing them near the space
5. During this period none of us fell sick or experienced any sort of breathing issues etc

Hope this helps you take an informed decision as well! Chirp Chirp :)

Popular posts from this blog

Introduction This is a story of a typical woman who is expecting a child- abundant sleep (yes as per the concept of relativity), eating whatever and whenever she desires, lots and lots of shopping, catching up with friends, movies, maternity shoots, super supportive family members…… and then the day arrives when the much awaited baby(ies) pops out!! A moment of joy- absolutely! But what happens to the mother? Lack of rest, lack of sleep, constant pressure of ‘feeding right – feeding enough’, recovering physically, too many things to sort out which none of the pre natal classes taught her! And this is the phase when babywearing could become her best friend! So mums/ primary caregivers lets learn more how to make this happen- What is babywearing? Babywearing (BW) is keeping the baby close you, with the help of the modern BW carriers or a sadi or sturdy cotton dupatta. Here you will come across two terms- ergonomic carriers/ non ergonomic carriers. Ergonomic carriers are those,
Read more 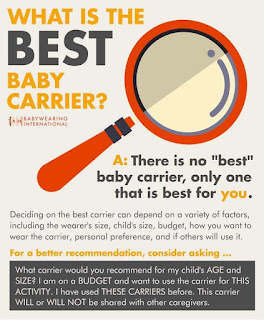 Babywearing is a very powerful tool where babies feel secure and happy and is equally comfortable for the wearers! So if you are a new parent/ expecting parents, you will surely have your doubts cleared on the basics of babywearing. As a babywearing couple, while we are out and about involving our babies in the things we do, we have seen different reactions from the people around! Some are curious, some feel bad, some get really excited, some approach us to know more! As a babywearing educator, here are my responses to the ten most commonly asked questions about modern babywearing-   1. Which is the best type of carrier available in the market? There is no such 'óne best carrier''. Each carrier type has its own set of pros and cons. Like you have soft structured carriers, meh dai, wraps, ring sling, onbuhimo etc. Each type has certain unique features; some offer quick ups and downs, some offer quick nursing, some offer a nice high back carry and so on. A lot als
Read more

A big Thumbs Up for the Brilrider! So it all started from the below conversation: He: Kids are loving the ride-ons, lets get them a cycle! Me:Yes absolutely, let me check the options! I do some research and find out from a fellow mom about the 'Balance Bike'.. Now whats this? Hmm did some research and it was in line with our way of bringing up children- 'Give them the right tools, right environment and they will learn themselves- be there to guide them along but no spoon feeding' Me: The BrilRider is for 4k! He: Really? An infant cycle, without pedals, without support/ trainer wheels , it looks overpriced definitely! Let me do some research.. A typical process of buying kids stuff ;) Finally we got one (Luckily at a discount during sale) and voila as expected, my kids welcomed it and came another soon in our house (Ah no fights!) I was in tears (happy tears :)) when I saw my 28 mo son gracefully balancing his brilrider. A moment of sheer delight, pride and surprise! and all those memor
Read more